News regarding solar energy generally focuses on solar panels, but without a battery to store the power collected from solar panels, much of the energy collected is fed into the grid for others to use. If the system is off-grid, that excess energy is wasted and there is no power to draw on when the sun goes down. A battery bank allows you to maximize the efficiency of your system and to have power to draw from 24-7.

Starter Batteries output large amounts of power for a short period of time.  These batteries are commonly utilized in starting vehicles or motors, with each use only discharging a large burst of current for a very short time. It is then recharged by the alternator for the next engine start. The emphasis of starter batteries is on power, not storage capacity. A serious weakness of starter batteries is that they aren’t built to endure deep-discharge or prolonged use. This will quickly shorten the battery life. Starter batteries have a very low internal resistance, which gives them the ability to crank out a high power load for a second or two. This low internal resistance is achieved by using very thin, sponge-like lead plates inside the battery for maximum surface area. The very thin plates are damaged or destroyed if subjected to steady continuous discharge. Generally, starter batteries are less expensive than deep-cycle batteries, but they are not interchangeable, despite the temptation. 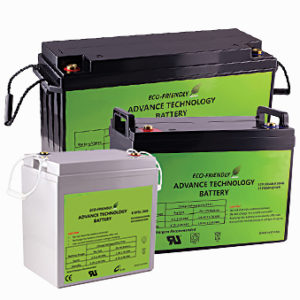 Deep-Cycle Batteries (aka Marine Batteries) are essentially the opposite of starting batteries; they provide a consistent flow of current over long periods of time. They are optimized for capacity rather than short bursts of power. They have sturdy, thick lead plates that can better stand up to repeated discharges and recharges. Their ability to deeply discharge and to re-charge efficiently is needed for stable power supply to run equipment, appliances and act as utility-grade power. Deep-cycle batteries can be charged from a variety of sources. They charge using DC power from solar, hydroelectric or wind power or from an AC source; plug-in grid power or a gas fueled generator, that is then converted to DC charging power.

Important things to note in deep-cycle batteries are the Capacity, measured in Amp Hours (Ah) and the Cycle Life, which is the number of times the battery can be charged and discharged before it looses significant capacity.  The Cycle Life is depends on how deeply the battery is discharged on average. This is called the Depth of Discharge (DoD). Standard DoD for comparing deep-cycle batteries is the cycle life at 50% DoD.

Deep-cycle batteries are used in home energy storage to store solar, hydro, and wind power, RVs and marine use for boondocking and power away from shore, off-grid homes, cabins and cottages, to run equipment, and to support mobile and portable power needs.

There are many different chemistries and points of comparison between different types of deep-cycle batteries which we explore in upcoming blogs.

This site uses Akismet to reduce spam. Learn how your comment data is processed.

Everything listed on our website for sale is in stock inside Canada (except for Firefly Batteries, which are in stock inside the US). Our current stock levels were from shipments that arrived in Autumn 2019. We anticipate that we may have trouble restocking items once they sell out, due to supplier difficulties in China. Please plan to make your spring purchases early, to avoid disappointment!

Update, March 20th: The Azimuth showroom has closed due to COVID-19. At this time we are still able to ship orders and our shipping/receiving staff are doing their best during limited hours to make sure your orders arrive as fast as possible. If you are local to us and looking to pick up your order, we are doing curbside pickup only at this time by appointment. Please call 236-420-4228 to schedule that. Our phone lines are answered by our answering service who e-mail and text our cell phones with your messages. We will get back to you as soon as possible. Thank you for your patience!