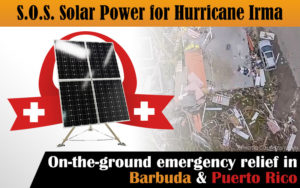 UPDATE: Our campaign to donate solar power to the Caribbean is live! Click here to visit: https://igg.me/at/t6Zysws-3V8

Azimuth Solar Products Inc. has a long-term solution to help restore power to island communities who have sustained damage from recent hurricanes with our Portable Solar Generator Systems, but we need your help.  We want to donate as many of our 360W portable solar generator systems as possible to on-the-ground emergency relief aid in the Barbuda and Puerto Rico.

We are hoping to meet their goal of $7,000 CAD to send two systems and as many power management components as possible. But the amount and nature of items ultimately donated depends on how much we raise. Along with our portable solar generator systems it’s also crucial to send batteries and power management components necessary to effectively store and use the energy generated by the Caribbean sun.

Our portable solar generators are powerful enough to supply power to medical equipment for emergency aid in hospital tents at the sites of impact. They can also power refrigeration for vaccines, insulin, and of course, food. These are high-capacity solar generating systems whose capacities far surpass that of conventional portable solar panels and systems. The ASP 360 is more similar to systems used by NATO or the U.S. Armed Forces for a much smaller cost.

Absolutely none of these donations will go towards administrative, marketing, or salary purposes. Every cent we receive will go towards overhead on sending these systems out to the right people. We’re partnering with humanitarian and non-profit veterans to create the right path for our systems to reach on-the-ground aid.

Why is portable solar the solution?

Island nations like Barbuda and Puerto Rico face some of the highest energy bills in the world because of the cost of transporting fuel. Fuel transportation costs were already high enough to stifle energy security in the Caribbean, with the average electricity bill in the region being three to four times that of the U.S. or other developed countries. Even more so after a hurricane, as fuel reserves are flooded and contaminated and gas generators are helpless until new fuel can make its way in over the water.

As Catherine McCabe, a regional administrator in Puerto Rico, explains, “No matter what precautions we take, the coastal flooding will impact oil tanks.”

In such a situation, solar systems have a huge advantage, as they can start generating power immediately without any fuel. With the Caribbean sunny climate, it’s easy to get the most out solar panels. We’ve already set up our solar generator systems in floods at home during the 2017 Okanagan Floods and designed them to be fully waterproof.

By far the most popular high-capacity solar systems used are the traditional rooftop panel arrays that are exposed to the elements year round. This permanent fixture solar infrastructure is at the mercy of the weather and easily destroyed by a hurricane capable of tearing trees from the ground.

With Azimuth Solar’s portable system, the panels can be taken indoors during the worst of the hurricane. When the storm passes, it can and then taken back out and set up tool-free within five minutes. Even so, the durable design of our unique tripod and support system can withstand winds up to nearly 140 mph with proper securing. With more tropical storms expected to follow Hurricane Irma, it’s important that infrastructure rebuilt in the region won’t be quickly destroyed again by following disasters.

Thanks to their super portable design, our systems can reach remote or isolated areas where infrastructure damaged. Our solar generators are designed to pack up and fit in the trunk of a car or to be easily carried by hand. Because all the necessary electronics are mounted to the folding panel support mount, the entire functional solar system can be moved with very little hassle.

Why Barbuda and Puerto Rico?

According to Barbuda’s Prime Minister Gaston Browne, upwards of 90% of all government and personal buildings sustained some damage by Hurricane Irma with 60% of the population homeless due to the devastation. Barbuda is being described as being reduced to rubble, with nearly every element of the island needing rebuilding, including infrastructure, telecommunications, institutions, and roads. A conservative estimation of the cost of rebuilding is set at $150 Million.

Our solar systems are powerful enough to power communication devices that don’t rely on the telecommunication infrastructure damaged by Hurricane Irma. They can also run power tools, water pumps, and even portable cement mixers, so Barbuda can be rebuilt faster.

Puerto Rico’s crumbling infrastructure and crippling economic crisis has left the region especially vulnerable to the hurricane’s effects. The damage to the power grid has had catastrophic effects on the territory, with some parts of the island predicted to be in blackout for up to six months. Some 300,000 Puerto Ricans lost power before the hurricane even hit, and 1 million are now in dark since Hurricane Irma.

In on-the-ground emergency operations, solar panels can recharge communication devices and keep people in touch with their loved ones during the stressful process of rebuilding their towns and lives. Electricity is important for basic sanitation like powering water pumps and can offer vital air conditioning in a place where hurricanes can be quickly followed by sweltering heat. As well, solar-powered lighting has been shown to reduce gender-based violence in Haiti and parts of Africa and Asia, and allow people to work, cook, and co-ordinate into the night.

For the long term, supplying cheap electricity to struggling regions means going back to normal months sooner. Rebuilding efforts can be accelerated and the quality of life for those living in blackouts can be drastically improved while reparations are underway.

Azimuth Solar Products is ambitious about saving lives and rebuilding regions in the Caribbean, but we still need some help to make that happen. Before Azimuth can begin production, we need to raise $7,000 CAD to cover our initial costs of bulk ordering and manufacturing. These orders are ready to go, and our high-power solar generators can be shipped out in as little as three weeks. We will start our orders as prices come in and adjust them as donations continue to grow the campaign.

A full breakdown of budget and updates can be expected throughout our campaign.

Campaign goes live on Monday, September 18th, 2017. Click here to see more or to donate to send solar systems to the Caribbean.

Donation, partnership, and retailing enquires can contact us through [email protected]

This site uses Akismet to reduce spam. Learn how your comment data is processed.